Thank you for signing up!

All forward thinking, and all under the direction of Pittsburg High School students who have been given a direct pipeline to the resources of Pittsburg State University and the City of Pittsburg.

Since August, small teams of teens have worked closely with university students in the School of Construction and scientists at the Kansas Polymer Research Center at PSU, and with local leaders, to complete these projects and others.

“They’re all aimed at positively impacting the community and the region,” said Cooper Hayden, a PHS senior.

What they have accomplished, as several from the community who gathered to hear their public presentations this week said, is hard to believe. 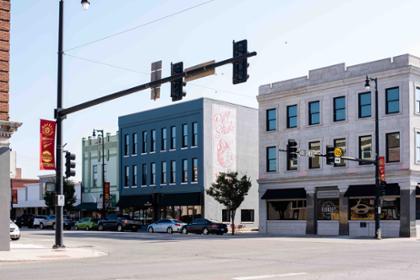 They met the first two hours of every school day at Block22, an innovative, mixed-use space in historic buildings in downtown Pittsburg that is a joint project by the university, the city, and a developer. There, students also had access to the university’s Small Business Development Center.

They then fanned out to sites at the university and throughout Pittsburg.

There was no curriculum, no test, no syllabus. It was completely hands-on, collaborative, and based entirely on problem solving.

“And yet we learned more in this class than we could possibly have imagined,” said Abe Alonso, a PHS senior. 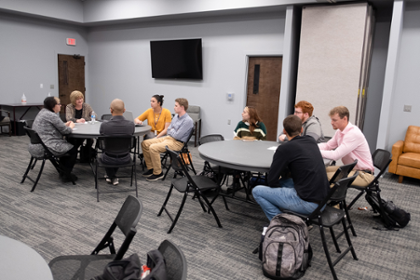 Cloninger said Launch was successful the first year in Pittsburg primarily because of the strong relationship between the university, the city, local businesses, and civic groups.

“They began to see how it all fits together,” she said. “They see the people who are the building blocks of new initiatives in our city, our county, and our region. They’re seeing it, they get it, and they want in. Their world view is so much larger now.”

Two of their projects had direct PSU connections:

A farmer’s co-op reached out to the class because of supply chain difficulties; the hay net wraps used by farmers are shipped from overseas, are sold to big distribution companies, then eventually make their way to the local level — if they are lucky.

Alonso was the team leader for the project and guided team members through information gathering, data analysis, design, and whether it could be produced from polyethylene in a manufacturing facility built next to the KPRC. 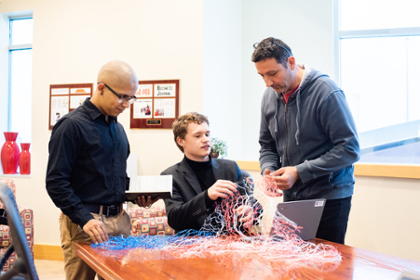 The Small Business Development Center provided expertise for writing a business plan and a financial outlook.

“We learned how to navigate time zone differences, language barriers, all kinds of things,” Alonso said. “The ultimate goal is economic development while also helping our area farmers. Our goal was to figure out whether such a business would be viable here in Pittsburg. This is a very niche product, but I knew if I could succeed at this, I could apply it to many other things.”

Team member Bryce Hoffman, who lives on a farm, could speak to the desire of farmers to buy such a product in America — an option currently not available.

“We buy four rolls a year and use it to bale our own hay,” he said.

KPRC leaders Darrell Pulliam and Tim Dawsey provided guidance to the team in periodic meetings, as did scientist Nikola Bilic — all of whom have been working on major federal grants to develop and promote new polymeric materials and plastics processing capabilities.

“The impact of this partnership with the KPRC is immeasurable,” Cloninger said. “Our students are collaborating with scientists from PSU and across the country, as well as business development leaders and farmers, to create products that will enhance industry and improve the environment.”

On the first day of Launch class, Quentin Holmes, the city’s director of housing and community development, and realtor Brian Jones, asked a small team to take on a project that would turn a dilapidated brick building at the corner of Second and Walnut streets into a usable and attractive space. 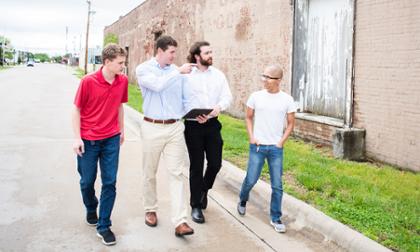 “They asked us if we could tear that building down and do whatever you wanted with it, what would you do?” said project lead Paul Moss, a senior.

The team’s answer: a place for people to gather, for vendors to sell their wares in pop-up booths, for bocce ball and cornhole tournaments, that would “make that area of Pittsburg better.”

“And in the process, we began making a name for ourselves,” Moss said. “We began connecting with people and forming relationships, which we never would have had a chance to do otherwise.”

Seniors in the PSU School of Construction taught by assistant professors Chad Crain and Chris Pross took on meeting with Launch as their capstone project: they assisted the high school students with plan revisions, showed them how to navigate the bid and construction process, and what materials would work best in various applications.

They’ll present the design and specs for The Spot to City of Pittsburg employees and members of Imagine Pittsburg on Tuesday, May 10, at 10:30 a.m. in the Block22 Community Room, and will ask community leaders to formally adopt the plans as a city project.

The hay net wrap project is the first step in a plan to establish the Materials Alliance Zone – Kansas (MAZK), which will focus on re-shoring materials-based manufacturing operations into Kansas. [Read more here]

“The level of networking and research, the relationships they’ve built throughout this year — it’s incredible, and it could not have been done without partners like PSU, the city, and our local business community,” Cloninger said. “What these students have gained is truly invaluable.”

Access this link to the original article from Pittsburg State University here.